Jump to ratings and reviews 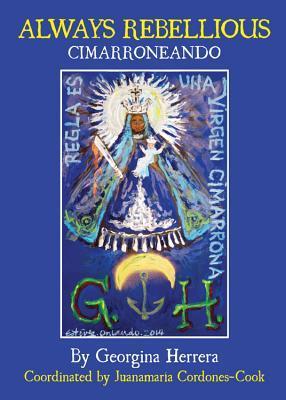 4.50
6 ratings3 reviews
Rate this book
Poetry. African & African American Studies. Latino/Latina Studies. Women's Studies. Translated from the Spanish by Mar�a Rodr�guez-Alcal�, Juanamar�a Cordones-Cook, and Alexander Cordones Cook. Compiled by Juanamar�a Cordones-Cook and edited by Sara E. Cooper. Winner of the 2016 International Latino Book Award for Best Bilingual Poetry Book. This bilingual volume of poetry (with DVD) introduces the unique voice of Cuban writer Georgina Herrera, whose poetry is inspired by her African heritage. Eliseo Diego calls Herrera's work poetry of origin, pain, heartbreak, and consolation. Herrera manages to transform her pain into central aesthetic components of her work, which point to a legacy of sorrow and sacrifice. Though she indeed has suffered, Georgina Herrera possesses courage, energy, and a penetrating intelligence accompanied by a profound sense of dignity and an age-old wisdom that enable her to take to the hills in order to go on and tell us the truths of her cultural memory, of her soul, and of her vast experience accumulated over 80 years full of anxiety, exclusion, violence, and discrimination. At the end, her self- definition is of dignity and empowerment, challenging the representation imposed upon black women.

9 books2 followers
Born in Jovellanos, Matanzas province, in Cuba, she began writing as a very young woman. Her first collection of poems, Gentes y cosas (People and things), was published in 1974; a second collection, Granos de sol y luna (Seeds of Sun and Moon), appeared in 1978. She works as a scriptwriter for the Cuban Institute for Radio and Television.

(from Daughters of Africa, edited by Margaret Busby)

What do you think?
Rate this book

Create a free account to discover what your friends think of this book!

4.50
6 ratings3 reviews
5 stars
3 (50%)
4 stars
3 (50%)
3 stars
0 (0%)
2 stars
0 (0%)
1 star
0 (0%)
Displaying 1 - 3 of 3 reviews
Opeyemi Olagunju
47 reviews
March 11, 2022
ive never been a poetry girly but these poems were gorgeous
Erica
Author 12 books43 followers
January 18, 2015
This book is wonderful. The poems are what I think of as representational lyric confessional; descriptive without much figurative or abstract language, they are almost portraiture. Representational in two senses: in the artistic sense in that it intently recreates images of the world surrounding the poet, like representational painting; but also in the sense of Neruda's "voice for those who cannot speak", the role of the poet to remember, to bear witness to oppression, inequality, suffering, hardship, and also joy, rebellion, resistance, and beauty, to represent the experiences of their people (identified by aesthetics, class, race, religion, or any other number of concerns).

Hererra's exquisitely "humble" language (described thusly by the introduction), emerges not just in the language choices made by the translator (simplistic, unadorned), but in the grammatical struture. Straightforward statements, descriptions, very little figurative language, but never tedious, never anticipatable. The cadences of the lines are compelling, and complex in a way that contrasts with the lovely unornamented, language:

"There is no trap I have not escaped.
They have never found traces
that lead to my refuge."

Gina
Author 5 books22 followers
December 10, 2018
Very stirring, and I like having the Spanish and English side by side, especially with poetry.

Strong themes of acceptance and connection, although the one that hit me most, Elogio Para Las Negras Viejas De Antes, basically spoke of an irreparable loss. Still, overall the collection is full of satisfaction and joy.
Displaying 1 - 3 of 3 reviews

Add
a quote
Start
a discussion
Ask
a question

Can't find what you're looking for?

Get help and learn more about the design.
Help center